She had a monster inside her.

He was shadowy and spiny and ran he laps around his home, inside of her heart.  His talons took chunks out of her flesh as he stomped his feet on her. In her.  The bristles on his back scraped and poked and gouged her insides as he turned and twisted.  He dug in. He chomped at her flesh and took sips of her blood; he drained her. He wounded her heart, leaving it loose, saggy, shriveled.  As tiny as he was, that monstrous speck in her heart, he weighed her down.

On the day the woman became a mother, her body opened up and the child emerged. With the child came gristle, blood, and watery fluids.  And also the beast.  The dreadful speck got washed away, expelled for good.

But, while her body was open and vulnerable, a new monster crept in.

The new creature surreptitiously found its way inside and into her heart. It filled the void The Other had left.  Only this monster was not a speck. It was a giant.  It packed her heart full, and crouched inside, with its arms around its knees and its back squashed up against the sides, for lack of space. The woman felt  an intense tightness in her chest from the pressure.  But she did not complain.

Unlike The Other, this monster was not covered in bristles.  It was cushy and downy soft. The pressure from this monster comforted the woman.  It made her feel complete. Warmed.  Full. Even though her heart now held more weight, the woman felt lighter. Over time, the new monster fed on her happiness and it continued to grow fatter and fatter inside the woman’s heart, which stretched and stretched to accommodate it.  The intense fullness usually felt good.

But sometimes it didn’t.

Sometimes instead of filling her with happiness, the distention scared her. Terrified her. Paralyzed her. Because the tiniest notion that there could once again be emptiness where the fullness now was, was unimaginable. Unthinkable. Unbearable.

The woman came to realize that the new monster wasn’t new at all.  The Other had not actually disappeared.  The tiny, barbed monster had simply put on a thick, cushioned, cloak. He was hiding underneath the happiness, growing larger.  Stronger.  And if the soft veneer were to be shed, the stiff bristles, which would have once left only a scratch, would now impale her from the inside, killing her for sure. The monster chuckled as it leaned back, settled in, and kept feeding, growing more and more obese, stretching her heart even further and further. 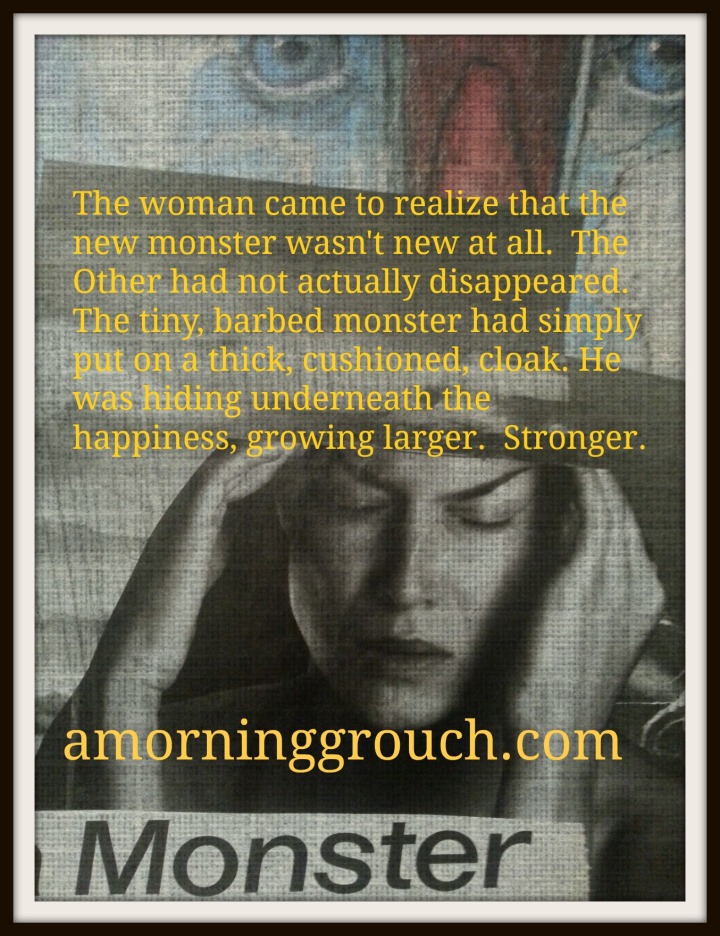 13 thoughts on “The Monster’s Comforting Cloak”