There’s this thing called face blindness.  Some people have it, and it makes it really hard for them to recognize others, even those they interact with often. Face blindness can compromise the ability to form lasting friendships or positive networking connections because a lot of people aren’t aware this exists, so it just seems weird when someone doesn’t say hi to you or notice you when you’re right near them.  Once you know this is a thing though, you can help someone with face blindness by reminding them of who you are when you greet them, or you could work with them to come up with some type of cool code or signal to implement so they will recognize that.

I sometimes think I have a similar type of condition, except it’s not that I don’t remember what people look like, but instead I just don’t notice superficial changes in appearance. I’m not the best at noticing new hair styles or new jewelry.  I don’t notice if you’re wearing a new lipstick, or shadow or if you’re even wearing makeup at all.  I suck at recognizing a fresh mani-pedi or new pair of pumps.  I hate to admit this, but even when my own mother developed a condition that deforms the structure of bone and it started warping her skull, pushing one eyeball out a little further than the other one, I didn’t notice it until she pointed it out. Once she did, I couldn’t unsee it, and it stayed that way for a month or so, I kept ogling her orbs. I still know that one eye looks a lot bigger than the other one does, but now, since I know it isn’t caused by a brain tumor or other life-threatening reason, I’m back to not noticing it again.  All of those visual characteristics people often pay so much attention to just seem really fuzzy and irrelevant to me.  I sort of get a glimpse of where those with face blindness are coming from.

Sometimes this causes problems.  Like, “Hey, don’t you like my haircut?!” asked in a way that is not really a question but is more of an accusation.  A lot of women seem to get mad at their spouses for not noticing those things, but maybe it’s really not so bad.

While I might not notice your new spring wardrobe, I also don’t notice when your face is dripping with sweat, or you are smeared with dirt, or you have a million rogue eyebrows shooting off in all directions.  I don’t see that the tank top and yoga pants you are wearing is the same one I saw you in yesterday.   I don’t see that your eyes have no liner or your shirt is wrinkled or you have a blemish on your skin.  But, it’s not like I’m not paying attention to you.   I still totally SEE you, just in a different kind of way.

We took Toddler Grouch to a museum not that long ago and they had a vertical wall full of holes, and huge colored plastic pegs you could push into them to create any pattern or shape you desired.  I snapped a photo of her and it looked like this: 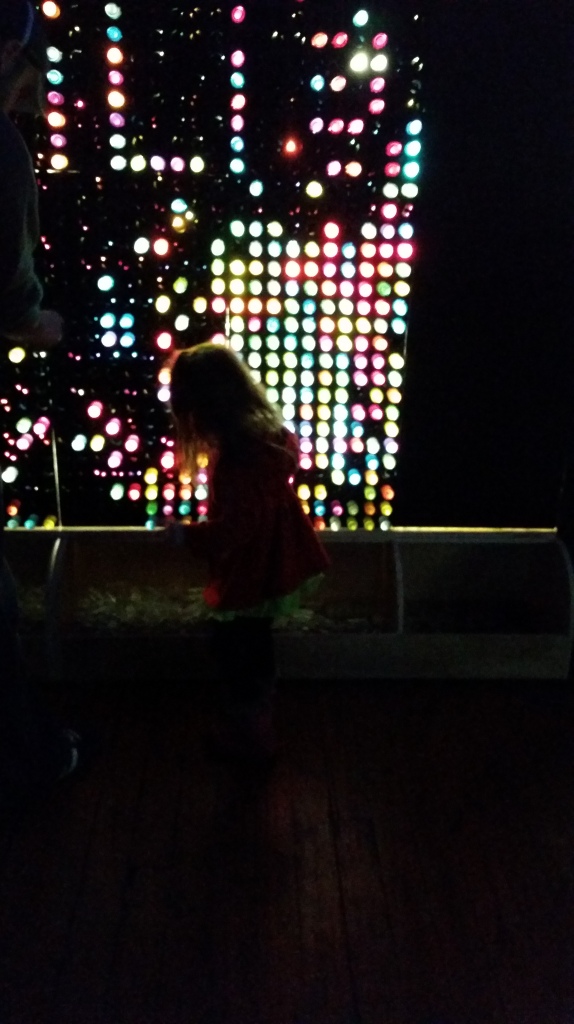 This is sort of how I see you.  I see a basic outline and a few details of what you look like, but it’s the lit-up board in the background that I really focus on.  The background is part of you, too.  Each peg represents some positive quality you have, so a blue peg might be your compassion and an orange peg might be your commitment and a white peg might be your honesty and a green peg your humor. There are pegs for your interests and activities, like running, or singing, or sailing, or crafting.  There are pegs for positive parenting and pegs for your kindness and concern for others. There are pegs for your listening and pegs for your sharing.  There are even pegs for your anxieties and your fears, if you’ve been willing to honestly expose them.  I will admit that I while I do sometimes appreciate superficial beauty, that’s only one peg, so if that’s all you’ve got, your background still looks pretty dark and dreary, but if you’ve got all the rest of the pegs on the board filled, missing one isn’t noticed. The more pegs you have the more lovely you are.  Toddler Grouch’s real board is packed with many more pegs than the one depicted in this photograph.

Not noticing everything about a person’s appearance makes some people upset. Some people want me to comment on their fancy watch or their coiffed hair, or their pushed back cuticles.  Sometimes I use this to my advantage to weed out those who care too much about looks, since many of those people have really empty boards behind them, or are so heavily guarded that trying to dig through their built up defensives to find their pegs takes more energy than I have available to expend. Maybe people who deal with face blindness weed others out in similar fashion.