My dad sent me information about a “Sweet Pea” photo contest at our local credit union.  I was excited.  And then disturbed.  And then resigned.

When I first heard about the contest, I thought to myself, “Baby Grouch is a sure winner of this contest!  She’s a knock-out; even people I don’t know will vote for her!  As I rifled through my mental Facebook Rolodex, I thought to myself, “I’m sure I could get a lot of my family and friends to vote for her!”  And for a nano-second I greedily thought this was a good idea.  After all, the winner of this baby photo pagent/popularity contest wins a pretty hefty photo prize package.

But then, I thought about it more.  Why are we giving money and prizes to the most beautiful child (clearly, mine) whose parents have the most extensive and supportive social network? (again, clearly mine)

Do I REALLY need this photo package?  Am I that hard up?  Or could I pay for any photos I wanted?

Do I deserve to get a prize because my daughter is stunning (she is), and because she is lucky enough to be surrounded by an amazing support group of family and friends? (she is)  Does it make sense to celebrate and give more to those who are already celebrated and have more?

What I’m saying is, it bothers me that we look up to unattainable and unnecessary standards of beauty and ignore the beauty of the weird, the unusual, the quirky.  It bothers me that we pretend to be wise and informed and intelligent yet we look down on those who have different forms of wisdom, know different kinds of information or have a different kind of intelligence than we do.  We embrace excess and conformity and exclusion and fakeness and ignore the beauty of honest and unique and real.  And we ignore need.  Or we don’t ignore it – and we mock it.  We berate it.  We insult it.  And that gets me all riled up.

So then I had an idea.

I would submit my Sweet Pea’s photo in the contest.  But, instead of her big, round eyeballs and two-toothy grin and her little brown-haired head cocked cheekily to one side, I’d submit a photo of the back of her head.  What if everyone who entered this contest submitted a photo of the back of their child’s head?  Would we vote for what kid had the cutest back of the head?  Who cares about the back of a head? And if we don’t care about the back of a head, why do we care so much about the front of a head?  Then I started getting cheeky.  Butt-cheeky.  What if I sent in a photo of her bum?  Would my blog readers support me enough to earn enough votes in this popularity contest to win this thing with a butt pic? Okay, maybe I was drinking too much wine.  But, you get my point. 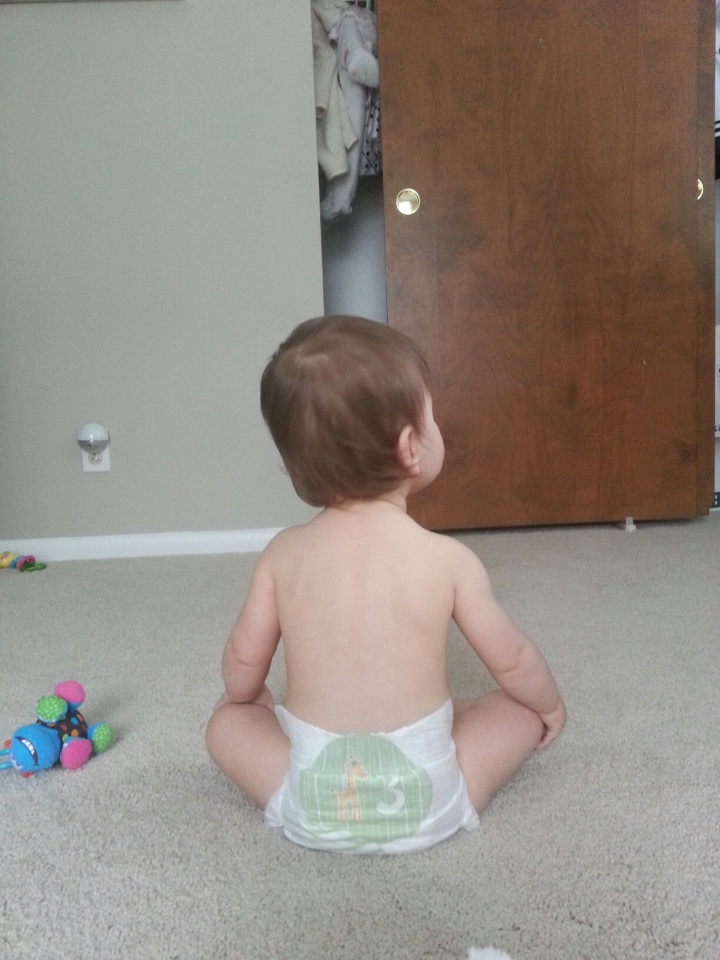 For the “Why do I think my child is the perfect Sweet Pea? portion of the application, I’d say “Because she’s she“.  Because she is.  And what about the rest of the kids who have backs of heads and who are “they”?  Their parents might argue that they deserve some recognition and a photo prize package.  And they do.  All of them.  Because everyone does, not just the stunning beauties and popularity queens and if we all ignored faces and friend counts, the contest would just be a lottery.  As it should be.  Does it make sense to celebrate and give more to those who are already celebrated and have more?

You with me on this?  There are more important things to get prizes for than societal imposed beauty standards and popularity contests.  Like 3749850357982q743 pajillion more (I’m quite sure that q in there is some mathematical variable that makes this number even huger than it already looks).

But, my husband brought up a good point.  He said, “Don’t ruin something someone else put together, just because you don’t like it.  Just don’t enter the contest if you don’t think it’s a good idea“.  And, I couldn’t really argue with that. Because then I started picturing some poor worker who was trying to do her job well and be nice by giving away a nice photo package and I didn’t want to make said worker feel bad either.  Sigh.  I think I’m getting too soft.

So, instead of making some sort of societal statement, I thought maybe I would enter Baby Grouch’s picture after all.  The wide-eyed, two-toothy picture, not the one of her bum.  Maybe by doing this I’d be selling out.  Or maybe I would just be admitting I really wanted the photo prize package after all.